Best Use: Multi Use

Where to Buy: Specialized Retailers

This summer we have spent a lot of time looking to replace my old Gary Fisher bike that I have had literally since I was 16.  It’s time for some new wheels, but choosing the right bike has not been easy.  When we were in Moab this past spring, I fell in love with mountain biking and was convinced I needed a full suspension bike.  While I still hope to have one sometime in the near future, we quickly came to the conclusion that for everyday use, a full suspension was not going to be adequate.  This is why people have 6 bikes…

What I needed my bike to do:

– Have some suspension to ease up the bumps

– Do great both on paved roads (for longer distances) and dirt roads (particularly the 5 mile gravel road with a 1000 elevation gain we climb between Gardiner and Mammoth.)

– Be comfortable (and fit me well!)

I approached Specialized in the hopes of being able to demo a bike.  I wanted to be able to show off some bike options for my readers, but also have an opportunity to test out a bike before we dropped hundreds of dollars.  I suggested a bike very different than the one they offered, though.

However, they know their bikes well and I have fallen in love with the Specialized Ariel for a variety of reasons. 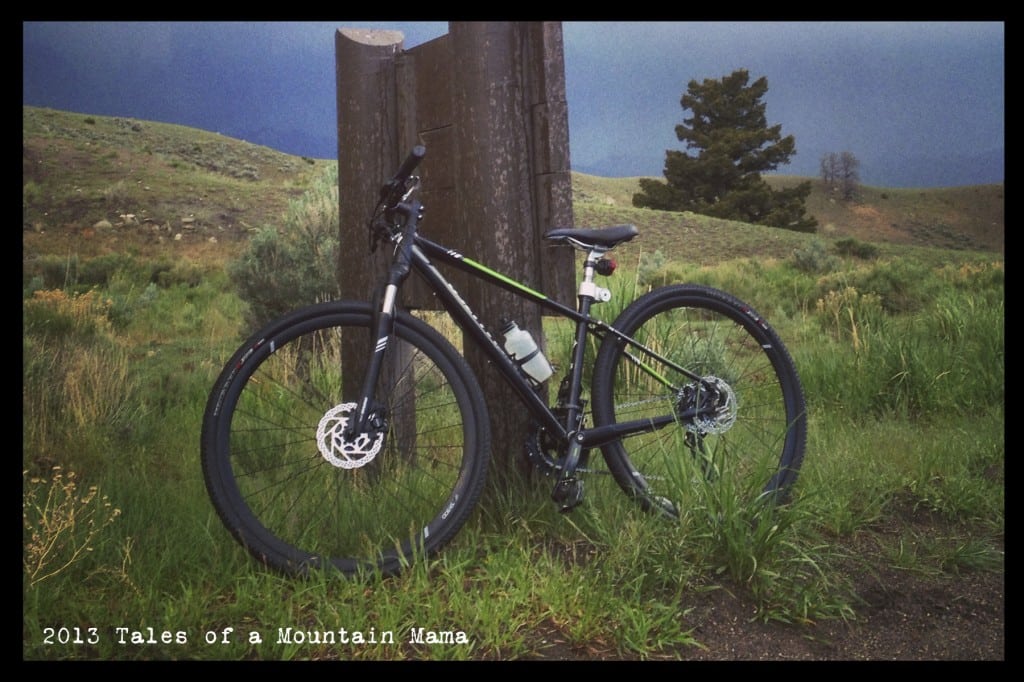 A hybrid bike built for both trails and the road, it has some “big wheels” to fill.  Around here, we needed something that would work well both on the big hills that are paved AND not paved.  We are usually hauling some big weight (in gear and kids) so it had to be able to handle that too.

The Ariel comes in a bunch of different models ranging from $580 MSRP to $1200 MSRP (differences are brakes and components.)  I have the Ariel Comp Disc so will be sharing the specs specific to that bike.

The Specs can be found on their site (because I fear overwhelming some with all the jargon).

What I am not so crazy about:

– The bigger tires also make it a little bit taller, so it isn’t quite as easy for me to straddle (while still having the right size bike.)  However, there is also a “step through” version.

– With our hilly and steep terrain, and the fact that we are often towing kids, it would be nice to have a lower gear to allow for more power up hills.

– I actually ended up switching out the seat that came stock on the bike with another Specialized one I picked up at the bike shop.  We were preparing to do a 76 mile ride this summer and I wanted just a little more comfort with a wider seat.

While I know that most people (especially with kids) have the money to drop $1200 on a commuter bike (unless you are really into it), the Ariel is a great bike for filling the numerous needs of its women riders.  While I would personally move past the base model (which still does have the front suspension) just to get disc brakes and some better components because of the precious cargo I am usually carrying, the Ariel in general is a great bike.  The tires are aggressive, yet still remain great for road riding, the ride is smooth and Specialized clearly has women in mind!  You can find the full Ariel line here.

Specialized generously provided us a demo of this bike in order to facilitate this review.  However, as always, the opinions expressed here are completely and honestly our own.

© 2013, Tales of a Mountain Mama. All rights reserved. Republication, in part or entirety, requires a link back to this original post and permission from the author.

3 shares
Best Insulated Water Bottles for Families + Giveaway
← Previous
Help! My kid doesn't like to be outside!
Next →
Click here to cancel reply.