This week is extra special with the launching of my friend’s new site, Garage Grown Gear.  A work in progress for literally two years now, Amy Hatch has thought through every detail.  While the actual site has been online for a while now, the official launch week is NOW and is being celebrated with 7 days of great gear giveaways.  Be sure to swing by the website and give them a like on Facebook.  Today Amy is joining us as she introduces some special families that have worked hard to manufacturer outdoor gear when they noticed a hole in the industry.  Their stories are inspiring!

Over here at Garage Grown Gear, where we scout for innovative, high-performing and wildly cool outdoor gear from independent outdoor companies, several of our favorite brands are owned and run by individuals with young kids. We wanted to know what life on the ground looks like for these mamas and papas, so we reached out to them to hear their stories and get their tips on how they make it all work. 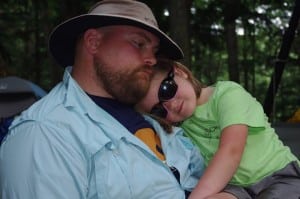 enLIGHTened Equipment just experienced a major milestone. The company that makes lightweight down quilts moved its headquarters out of founder Tim Marshall’s basement into a shop two blocks away.

“We’re legit now, we pay rent, we have an address,” he said.

But even though he’s thrilled about the change of venue, it’s been a difficult transition. Why? Because for the first time since 2008 he’s now away from his kids, age 6 and 2 ½, during the day.

“I’m used to doing all my customer service e-mails sitting on the couch as my kid watches Thomas the Train,” he said.

Or, quite often, he’d be designing quilts while his daughter sat next to him doing her own design work. 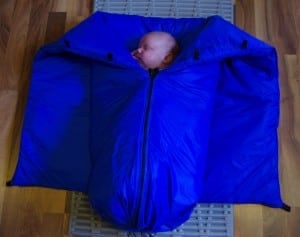 Tim has always tried hard not to let enLIGHTened Equipment impact his time with his kids. His resolve on this point was strengthened after an incident one day when his daughter gave herself a haircut while he was distracted dealing with quilts.

“I wasn’t going to go the hair cut route again,” he said, “that was a moment for me when I realized I had to make the quilts a second priority.”

But, now, the situation has changed. Tim is absorbed in his business for 10 hours each day, while his wife recently resigned her job to become a stay-at-home mom.

“There’s a lot more at stake right now,” Tim said, referring to the fact that the family’s income depends entirely on enLIGHTened Equipment.

As part of our launch week Garage Grown Gear is giving away two Enigma quilts from enLIGHTened Equipment. The giveaway goes live Saturday, March 22 and will stay open for 5 days. Visit our website to enter. 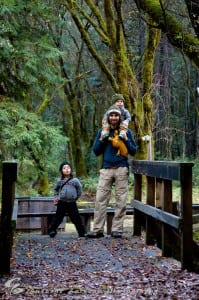 The wife-and-husband team who founded Muddy Munchkins, a new outdoor gear company for kids, can relate to the balancing act Tim juggled for so many years.

“We’ve done a lot of the stuff [for the business] after the kids go to bed,” said Suzanne Solsona.

While launching a business and, at the same time, being a stay-at-home mom isn’t always easy, Suzanne says there is an upside.

“You start to relate to manufacturers and suppliers on a whole different level when you bring it down to ‘you’ve got kids, I’ve got kids.’”

And she admits that when she has a really important phone call she’ll use a pretty effective, albeit limited, babysitter called technology. Her kids ask her to schedule important meetings, she only half jokes.

Muddy Munchkins was born out of the outdoor lifestyle so important to Suzanne and her husband Javier. They’re huge believers in the value for kids of sun, dirt and water. 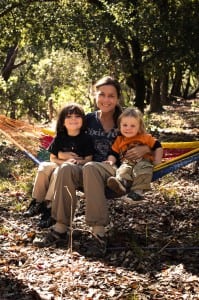 Muddy Munchkins signature product is a waterproof gaiter attached to a flexible, comfortable kid’s shoe. Not yet on the market, they’ll be available this summer.

“This is not only about being in the outdoors, but extending outdoor play,” Suzanne said, referring to Muddy Munchkins footwear, “because when you fall in the mud face first, it’s all over.” 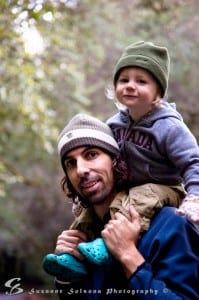 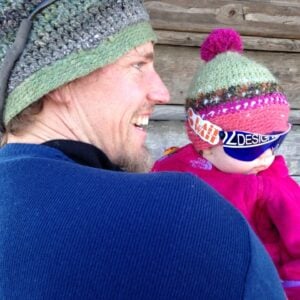 Chris Valiante, co-owner of 22 Designs telemark binding, is just beginning to work out the logistics of melding business ownership with fatherhood. His first daughter was born in late fall.

So far the newborn has visited his shop three times.

“I bring her to the shop and leave her until she starts making some noise,” he said. “I try to do anything that involves machinery or moving something heavy while she’s still in the car seat.”

Then he wears her in a wrap while he does work on the computer, which usually puts her back to sleep, Chris said. 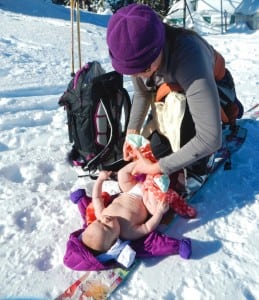 Chris and his wife, Lane, have rocketed out of the gates as an outdoor family. They frequently take her cross-country skiing and on mellow backcountry ski tours. The little lady even joined them on a part-ski, part-work trip to Europe last month.

Chris said his favorite part is watching his daughter look around as she experiences snow and mountains for the first time. 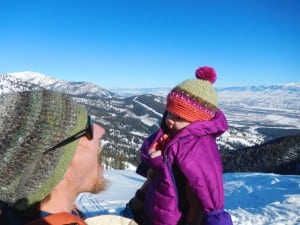 Amy Hatch is the founder of Garage Grown Gear (www.garagegrowngear.com), an online magazine and e-commerce store (phase 2, coming soon) that connects people to innovative, high-performing and wildly cool outdoor gear made by independent companies. The website’s launch week is going on NOW with 7 Days of Gear Giveaways. Amy is also the founder of Jackson Hole Packraft & Packraft Rentals Anywhere (www.jhpackraft.com), which rents packrafts both locally in Jackson Hole as well as throughout the country via FedEx. When not tapping away at the keyboard, Amy can be found singing silly songs with her two-year-old daughter or skiing Teton Pass with her husband.

© 2014, Tales of a Mountain Mama. All rights reserved. Republication, in part or entirety, requires a link back to this original post and permission from the author.

If you believe in flexible shoes for kids, check out Muddy Munchkins boots - Garage Grown Gear

[…] about how they’ve managed to start this company while still focusing on their kids, check out this guest post I wrote about them (and other parents who have started outdoor gear […]

[…] get to know Founder Tim Marshall, check out our guest post we wrote for Tales of a Mountain Mama about individuals who balance owning outdoor gear companies with being […]